Imaging Homelessness in a City of Care was a participatory mapping project undertaken with 30 single homeless people in Newcastle-upon-Tyne (UK) in 2014. The project’s objectives were threefold: to pilot an innovative mapping-based methodology; to offer single homeless individuals an opportunity to comment on local service provision and delivery; and to inform and challenge public perceptions of homelessness. In what follows, we outline the context for the project and the reasons for adopting a mapping approach. We then discuss the research process and the various insights generated. Finally, we reflect on the effectiveness of the methodology used.

The term “single homelessness” refers to adults without dependent children who are not entitled to housing provision under homelessness legislation in England. In the absence of formal monitoring processes, it is a category of homelessness which remains largely unquantified. Figures indicate, however, that rough sleeping levels have increased by 134% since 2010 (DCLG, 2017). The increased visibility of homelessness on our streets is provoking mixed reactions. Gifts and donations to many homelessness charities have increased, while greater engagement with street homelessness by faith-based groups is also evident (Cloke et al., 2012). At the same time, media scrutiny of the character and morality of homeless people has also increased (Fitzpatrick & Pawson, 2014), and punitive responses to street homelessness also remain prevalent (Harding & Irving, 2014). In this highly polarised context, it is important to both inform and challenge public perceptions of homelessness.

The research proceeded by means of six workshops with 30 rough sleepers and users of supported accommodation. Participants were encouraged to annotate two-dimensional maps of the Newcastle city centre with reflections on the spaces, places and experiences significant to their life courses. The maps played a useful prompting role in the surfacing of participants’ experiences, attitudes and values. Many participants were engaged with following a night of rough sleeping, meaning the articulation of life events through conventional talk-based methods would likely have proven challenging. Furthermore, the intuitive nature of map-making was intended to empower participants to take control of the research process. The generated mappings were shared with the artist Lovely JoJo, who prepared a “composite” map. The aim here was to present the participants’ perspectives in a manner that was deliberately lo-fi and therefore in keeping with their selective and subjective nature.

The composite map displays a complex and often contradictory mix of practices. First, it highlights the large diversity of pathways along which individuals progress into homelessness; “evidence” that, while some people may be more predisposed to falling into homelessness, ultimately, anyone can fall victim. Second, the map highlights the daily challenges associated with street homelessness, as well as the multiplicity of survival strategies employed in response. While many of the strategies in evidence resonate with existing stereotypes, they can also be viewed as instances of “individuals cleverly deploying their creativity, competence and cultural knowledge to survive” (Duneier, 1999: 312). Third, it presents a series of counter-readings of the use of city spaces and forms. Doorways, for example, are reproduced as social and sleeping spaces, while pipes and ducts are shown to provide a modicum of warmth and comfort. Fourth, the map reveals a range of behaviours and activities characteristic of “normal” functioning lifestyles, thus presenting the participants as fully emotional subjects with needs, desires and a genuine sense of themselves (May & Cloke, 2014). Finally, it depicts the variety of the city’s homelessness services. While there was evidence of punitive responses to homelessness, most participants spoke highly of the received support.

The map proved highly effective in capturing the imaginations of audiences. The project’s launch was attended by over 60 policy makers, practitioners and academics. The project blog has received over 5,000 hits from over 40 countries, and the map has received widespread media coverage, with an audience reach of over 2.5 million. The positive reaction appears to be based on the ability of the map to engage audiences instinctively and emotionally. Those offering comments stressed how the map served to emphasise the many different meanings assigned to the city, whilst also humanising discussions of homelessness. Comments included: “I found the maps of the participants and Lovely JoJo deeply affecting. I find myself returning to them and reconsidering the places I thought I knew.”
However, the composite map is not without limitations. It does not provide an objective picture of homelessness in Newcastle-upon-Tyne. On the contrary, it is a social construction with its own performative character. Participants selected information to be mapped based on their “in-the-moment” subjective realities. Furthermore, the map is only partially able to depict the complexity of homelessness. Objects and events which lack geographical specificity (e.g. mobilities) are frequently obscured, despite the array of arrows and symbols. Therefore, mapping processes such as this one are probably most useful when used in combination with other methods of data collection.

For us, the experience of participatory mapping has confirmed the suggestion that many traditional methods of social science fail to engage with the many aspects of everyday life, thus lying outside the narrow discourse. There are, on occasions, thoughts, feelings and experiences that are simply “unspeakable”. The value of maps such as this one, therefore, lies in their ability to engage an audience instinctively and emotionally, rather than through “rational” argument. Creative approaches to writing, mapping and image-making appear to be just some of the ways in which researchers can seek to access and communicate embodied and pre-reflexive knowledge. 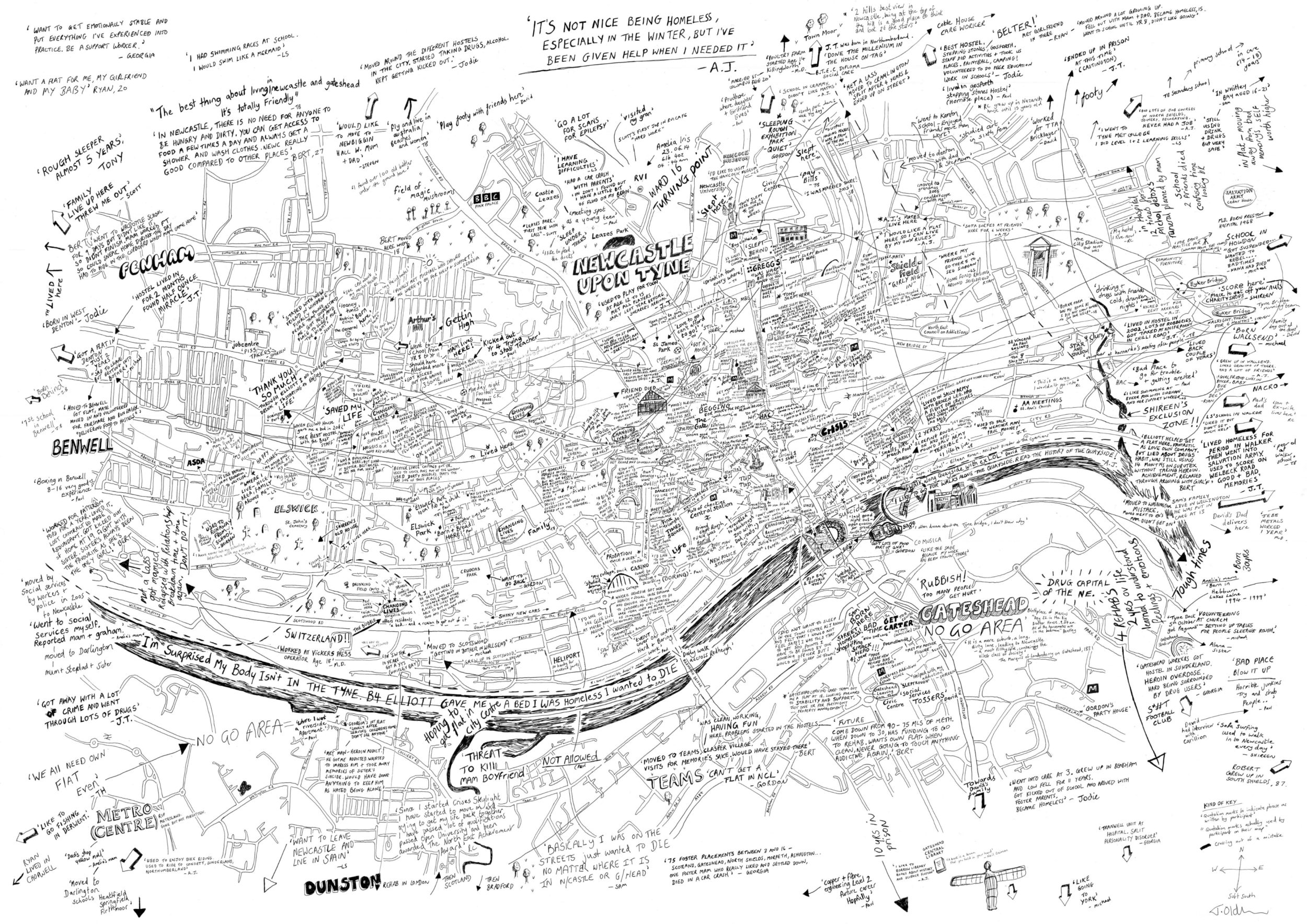