Making a Deep Map is a way to be conscious of a place in such a manner as to hold multiple layers of understanding of the present moment in a non-reductive and robust manner. This is in contradistinction to the ways we normally speed through and consume the landscapes and places of our petroleum-driven, industrialized lives, and the related sense of self this produces. A Deep Map of a place includes many things: direct perceptions of that place; its inhabitants’ memories; embodied understandings as the place enters you in numerous ways that are emotional, psychological, physical, spiritual and transcendental; geological formations; morethan-human actors like animals, plants, microbes and landscapes; historical developments from different eras; weather patterns; agricultural uses; modern infrastructure; bioregional processes; contradictory ideological ratiocinations and more. A Deep Mapping of a place potentially has no limits to complexity as long as it is meaningful and you have – or a group has – the ability to hold an awareness of the varying ways of understanding. The layers can be added as long as this helps elucidate and makes present a complex way of relating. This short text describes where the idea of a Deep Map comes from and how it can be developed further and applied as a methodology in direct social and spatial encounters.
The idea of a Deep Map, as an emergent method – and cultural formation – for thinking the world in terms and ways that work to eliminate petro-subjective positions,1 was directly inspired by William Least Heat-Moon’s book PrairyErth: A Deep Map (1999). In the book, he describes borrowing the ethnographers’ process of “thick description.” This concept was introduced by anthropologist Clifford Gertz in his book The Interpretation of Cultures (1973). A thick description enumerates a culture and its behaviors while it simultaneously gives a dense context so that the behavior becomes understandable to those not a part of the culture being described. Least Heat Moon’s use of Deep Mapping takes on a powerful literary approach to understanding a place. PrairyErth tells the story of several counties in Kansas that once thrived but are now in severe decline with few denizens. Least Heat Moon creates incredibly dense contexts for telling the stories of the current inhabitants and what might motivate them to stay as things continue to decline and the world changes around them. Least Heat Moon starts each exploration of the various Kansas counties he covers in PrairyErth with a bevy of quotes. He takes them from historical records, daily newspapers, poems, philosophy books and many other sources from the local culture as readily as elsewhere. These quotations begin to sensitize you to the many things he will be talking about on the pages that follow immediately after. In presenting you with a particular place, he might describe important geological formations, then move on to how the indigenous people used the land, their displacement by settlers, the fast industrialization of the place, and then the decline of the modern economy, which sets the stage to meet people who have stayed in towns that are mostly vacant and falling apart. The book is a dazzling achievement that makes the stories of these places thrive and become tangible, almost a shared reality with the people he talks to.

How to Inhabit a Deep Map

Permacultural resource mapping, developed by the late Bill Mollison and others, can be used to help visualize aspects of a Deep Map. These processes are highly compatible and are very powerful when combined. I am constantly inspired by illustrations from the Permaculture: A Designers’ Manual, by Bill Mollison (1988), in particular two maps that show the production of a single chicken egg. One shows an industrial egg and all the resources that go into making it, complete with all the energy-intensive and wasteful processes like the burning of fossil fuels to make many of the materials needed to house, feed and transport eggs laid by the chickens. This map is contrasted with another that shows a permacultural egg and how its making dramatically reduces the wasteful and polluting energy inputs needed by creating things like self-generating food sources that feed the chicken as the chicken’s waste feeds it, and so on.
The image above demonstrates how I have used permacultural resource mapping. Material like this map is used in the gatherings I organize. This particular map is of an individual’s Petro-Subjectivity; it presents many potential intersections in one’s life with oil and its presence in every imaginable process and action. Making maps like these are useful to help think about how you would go about organizing your own Deep Map experience.

Instructions for Making a Deep Map

Making a Deep Map takes a significant amount of time to organize and construct. It requires a commitment of resources, finding collaborators and creating a situation where one is a facilitator among other facilitators. Everyone involved in some way becomes a co-creator of meaning and experience. The Deep Map enables an experience where no one person, discourse, or narrative holds power over an understanding of the things you are investigating. They are combined, piled up and co-exist even when they seem to be contradictory. The Deep Map gives participants immediate, directly embodied participation in the subjects and leaves them with an understanding that is not possible otherwise. 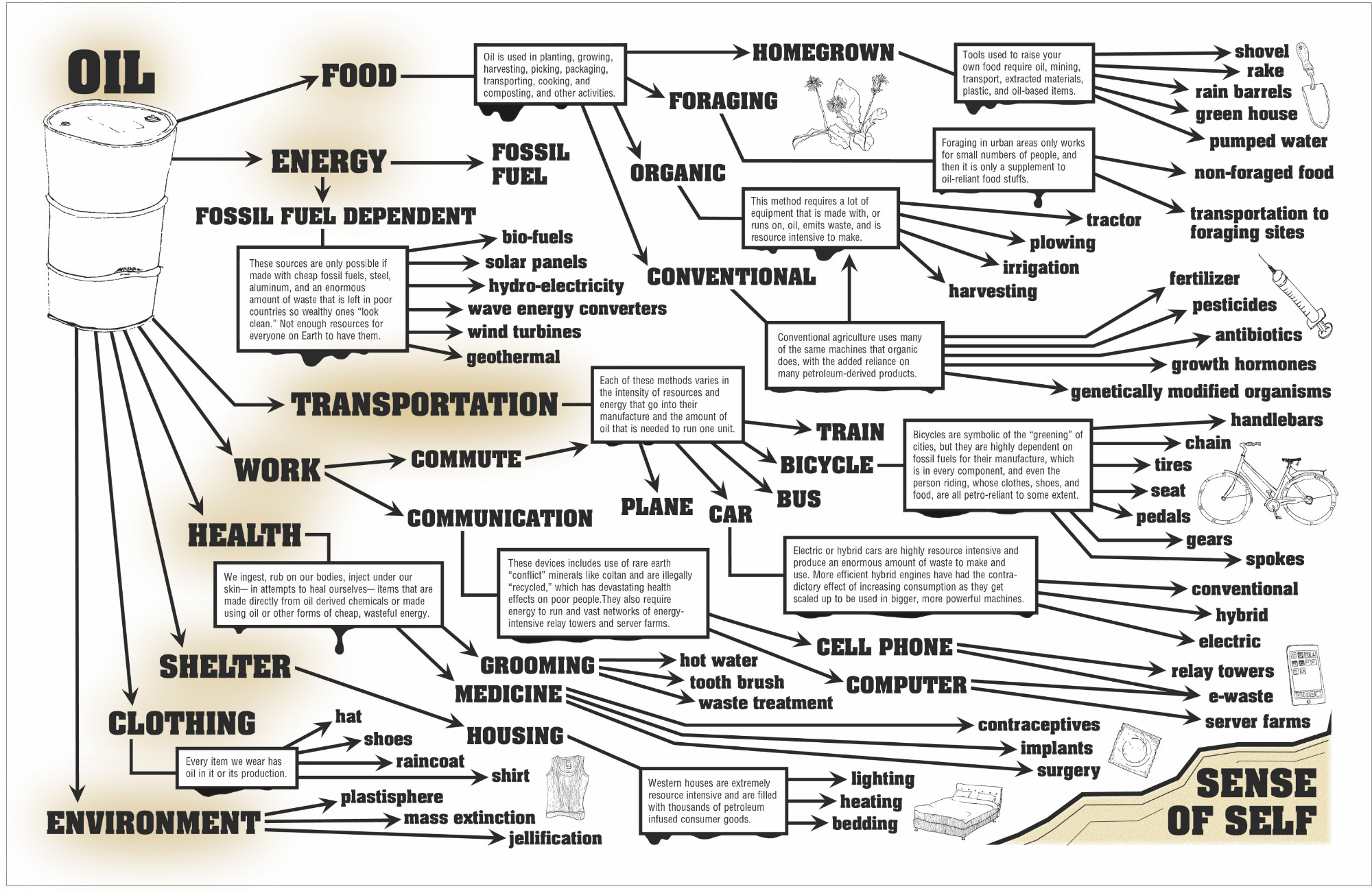