From Afghanistan to France

The map presented here (see map right column) sketches a trail of exile from Afghanistan to France. It was created by H.S.1, who was seeking asylum in France when we met. H.S. attended the cartographic workshops titled Crossing Maps that artists and researchers in geography organized with other asylum seekers and refugees in Grenoble in May and June 2013.
The map’s zenithal view makes it possible to understand the places and the distances involved at a glance, but it is not the only perspective that is presented. The map is also drawn from ground level, using the path pursued, and from inside the trailer behind a truck. In the frontal view, the mountains around Afghanistan and Iran break with the zenithal perspective, and so do cars, trucks, boats and an individual on the road. Returning to ground level, one perceives the space as a landscape of displacement for H.S., who represents himself in his work. This map blurs the dichotomy between the map as a grid and as a route.
The former is the result of the a priori imposition of codes that seek to depict a point of reference that is considered stable and measureable; the latter “provides a representation of the territory on which [it] is not considered independently from the practices that are deployed […] on the contrary, it is defined within its structure by the practical engagements of those who record their wanderings there.” (Besse, 2010: 7).
The map From Afghanistan to France (see map right column) presents the journey of the traveller-cartographer, using the conventions of established geography and geopolitics (the names of the countries and of the cities crossed before reaching France) but also representing the experience of the road (the material and political obstacles that have to be overcome, the hardship of being confined inside a truck, the encounters with the police…).
This map of exile is not the creation of a totalizing eye; it is also seen from below, from the walking point of view and the multiple practices and tactics used to cross geopolitical borders. In this sense, From Afghanistan to France subverts the conventional and normative maps of migrations and nation states. Embracing a point of view from the ground, this map is questioning the “commensurability of Euclidean space, […] the scientization and regularization, […], disciplinization of space” (Crampton & Krygier, 2006: 18).
In addition, From Afghanistan to France is not only a cognitive or mental mapping. In order to read the map, it is necessary to read the map legend (see map at the end of the article). Here the different symbols do not represent rivers or settlements; instead, they symbolise the fear, danger, police, injustice, friendship, love… encountered en route.

H.S., who created this map, is one of the Grenoble residents who were invited to take part in the counter-cartographic workshops (Mekdjian et al., 2014; Mekdjian, 2016) that took place over two months, in May and June 2013, in Grenoble on the premises of the association Accueil Demandeurs d’Asile (ada-grenoble.org). This local association helps individuals seeking asylum in Grenoble to deal with the administrative procedures that affect them.
The cartographic workshops, initiated by Sarah Mekdjian, geographer, brought together twelve Grenoble residents who were seeking asylum as well as three artists, Marie Moreau, Lauriane Houbey, Fabien Fischer, and a geographer, Anne-Laure Amilhat Szary. The participants came from Sudan, Afghanistan, Armenia, Eritrea, Azerbaijan, Algeria, the Democratic Republic of the Congo and others. Some were staying in emergency shelters and hotel rooms, while others were living on the street or in squats.

A Few Intentions of the Counter-Cartographic Workshops 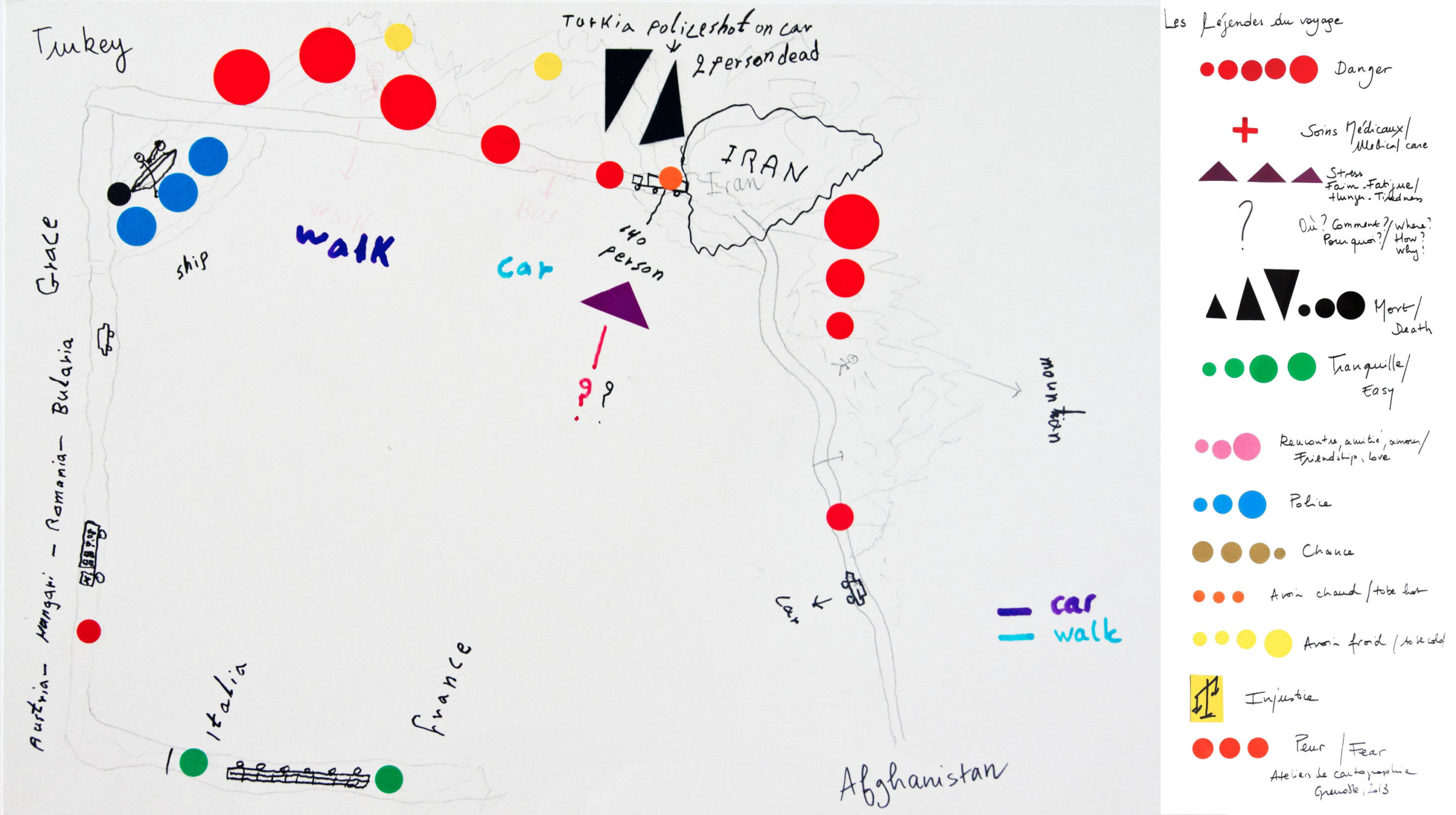