This map is based on interviews with AnneMarie, who, at thirteen years old, was struggling with teen pregnancy and her unexpected success as a young movie actress. AnneMarie’s story was the inspiration for Hannah Weyer’s novel On The Come Up.
The map depicts Far Rockaway, the isolated neighborhood on the outskirts of New York City where AnneMarie grew up. I wanted the map to reflect the isolation of the place as AnneMarie imagined it.
To do that, I started by asking AnneMarie to make a few drawings of her neighborhood from memory. For one, I asked her to focus on personal landmarks and how they related to each other geographically. For another, I asked her to map common journeys she made. Lastly, I asked her to map the neighborhood’s boundaries, edges and places of entry and exit.
Going over her drawings, I saw that her routes and trajectories would often hit common obstacles (the Nassau Expressway, the coastline, large government housing complexes, etc.), which forced her to turn or end her journey. As a young girl, AnneMarie rarely had cause or opportunity to leave Far Rockaway, and these obstacles became boundary lines. The map beyond these borders starts to lighten, and eventually the buildings dissolve into a void. AnneMarie assumes that the world beyond Far Rockaway is a lot like her own, but she is not exactly certain what is beyond. The map that I drew imagines Far Rockaway as a kind of island anchored to the world by a single piece of coastline. The neighborhood itself shows non-descript patterns of structures – the faceless buildings that don’t much concern or interest a child as they move along their established routes to school or to the corner deli. Landmarks that give AnneMarie’s personal map its reference points punctuate the patterns: the homes of friends and the major social institutions that define her life.
Far Rockaway sits on a peninsula at the outer boundary of New York City, and the A Train is the only subway that reaches it. Far Rockaway is the last stop on that line. As a young girl without a car, the A Train was the only way AnneMarie really left her neighborhood. I drew the A Train as the only reference to Far Rockaway being part of the larger New York City, as an umbilical cord that connects the socially isolated area to the rest of the city. 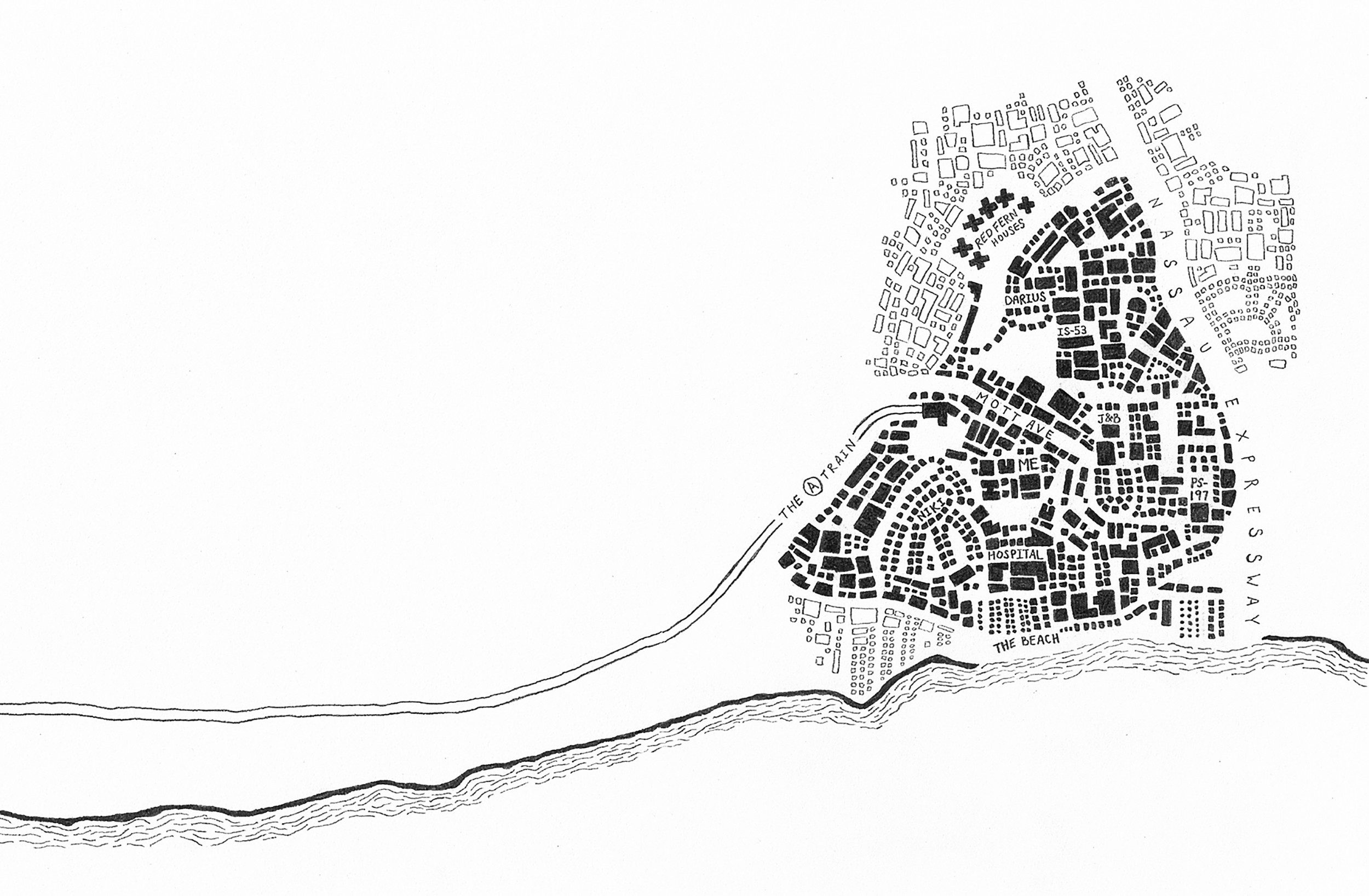