Creating a map can be an effective strategy to challenge established representations of reality. However, for many critical cartography projects, initial ideas of what should be made visible on the map are quickly followed by the sobering insight that suitable data is often simply not available. Even when we would be willing to pay for the data or work with commercial or governmental institutions to get access to data, we may find the specific market-driven or governance-centered view of these actors shapes the data that is collected and released in the first place and therefore available for map-making projects.

For the genderATlas project, we faced the challenge that while a lot of statistical data on various aspects of the representation and opportunities for women is collected by official statistical bodies, the granularity of those data is usually limited to the level of administrative units, such as counties and municipalities, restricting any cartographic project using the data to reproducing this predominant way of structuring space according to the established hierarchy of political administration. For any more fine-grained analysis, such as the reflection of the representation of women in public space on an urban scale, we would be on our own – extensive spatial data sets on the issue of gender equality are simply not available on a fine-grained scale in Austria.

To allow us to produce a map for the topic of gender representation in urban public space, we developed an approach of working with data commons that are not by themselves concerned with the topic (like Wikipedia or OpenStreetMap), but allow us to link those sources together and build upon them. In the process, we would contribute to the commons in the form of corrections and additions, as identified by the needs of our project. By “standing on the shoulders of giants”, we could leverage the precision and extensiveness of these community-driven initiatives to support our critical mapping project.

As of January 2016, Vienna has 6,842 streets and squares. The topic of fair representation of women in street names is well known and publically debated in Vienna, but no comprehensive publically available data source exists that would allow detailed analysis or visualization. Also in the realm of data commons, a data set with the required information was not available.

Wikipedia provides a comprehensive list of street names for Vienna, separated by district, which is well maintained and includes a short comment on the origin of the name.1 These comments include the name of the person the street is named after, but not their gender in an explicit format. In a first step, we constructed a computer-processable list of street names and their “base names” (the entity the street is named after) by scraping the data from Wikipedia, using a Python script. Errors that occurred during the data scraping (e.g. due to inconsistent formatting of the list) were fixed directly in Wikipedia, thereby contributing to an improved data common.

The (False) Promise of Total Automation

The second data commons we used was a free list of first names and their gender assignment.2 An initial attempt to assign gender information to the base names automatically through a script by simply looking up the first word (assumed first name) on the list of names failed – only about 19% of streets were assigned a base name that could be linked to a specific gender (15.1% male and 3.6% female). However, this process gave us a starting point for subsequent manual processing.

In this manual data processing step, all street names, the automatically assigned gender information and the comments from Wikipedia were exported to a spreadsheet and edited manually. This took approximately two full working days and resulted in a reliable source of information for the analysis. It showed that 57.4% of the streets were named after a male person and only 5.2% after a female person (a factor of 1:11). Interestingly, the automatic assignment step worked considerably better for female names (3.6% vs. 5.2% correctly assigned) while it worked for only a fourth of the male names (15.1% vs. 57.4%)! The reason for this difference lies in the fact that for female persons, the first name of the person is more often added to the street name (e.g. Maria-Theresien-Straße), while for male persons, only the family name is often used, making it impossible to detect the gender with our automatic approach.

Computer technology often suggests that everything can be automated and manual labor or interpretation becomes obsolete. Our project shows that this is a false promise – although all information was available, extensive human processing was required to complete the process and verify the correctness of the data. The automatic processing even skewed the results to grossly overestimate female representation, which illustrates the fact that even “neutral” technical algorithms can and will amplify subtle discriminatory aspects of social reality if applied without critical supervision and the possibility for human intervention.3

Producing the Map with OpenStreetMap data

In a last step, the annotated street name data was joined with geometry data from OpenStreetMap (OSM)5. Geometry from OSM was selected and downloaded, using the Overpass API6. The final online map was produced with the help of the mapmap.js cartographic library7 to create an interactive visualization of the data from the analysis. Viewers of the map can switch between a street map, revealing details like short biographical sketches of the historical persons, and a diagram view, where all streets are lined up in three categories (female, male, other) by their length.

Although the facts we showed on our map were well-known before and are subject of an ongoing debate in the city, the map got a very positive reception and is, at the time of writing, the second-most accessed map in the genderATlas. We suspect that some of the popularity is also owed to the unconventional animation, showing the powerful but somewhat ambiguous role that “special effects” have, even for spreading critical messages.

However, like any counter-hegemonial project with high visibility, the map also attracted trolling and criticism, with some critics focusing on the classification ambiguities discussed above. It was important to have a clear policy on how to deal with these ambiguities within the project in order to respond to such criticism (which, however, often seemed to be not intended as constructive feedback anyway but purely to find flaws in a project opposed on political grounds); in a next version of the map, we are planning to communicate these decisions even more explicitly and consider providing a user interface for letting the viewers decide on the classification policy, for example, on whether or not to include toponyms in the categorization.
The attempts of individuals to discredit the project based on perceived errors shows, however, that accuracy of the data and a clear documentation of how ambiguities and edge cases are dealt with is of special importance for counter-hegemonial and critical projects, even for seemingly simple and straightforward projects, like visualizing the representation of gender in the street names of a city. The resulting map and data is available at genderatlas.at/articles/strassennamen.html 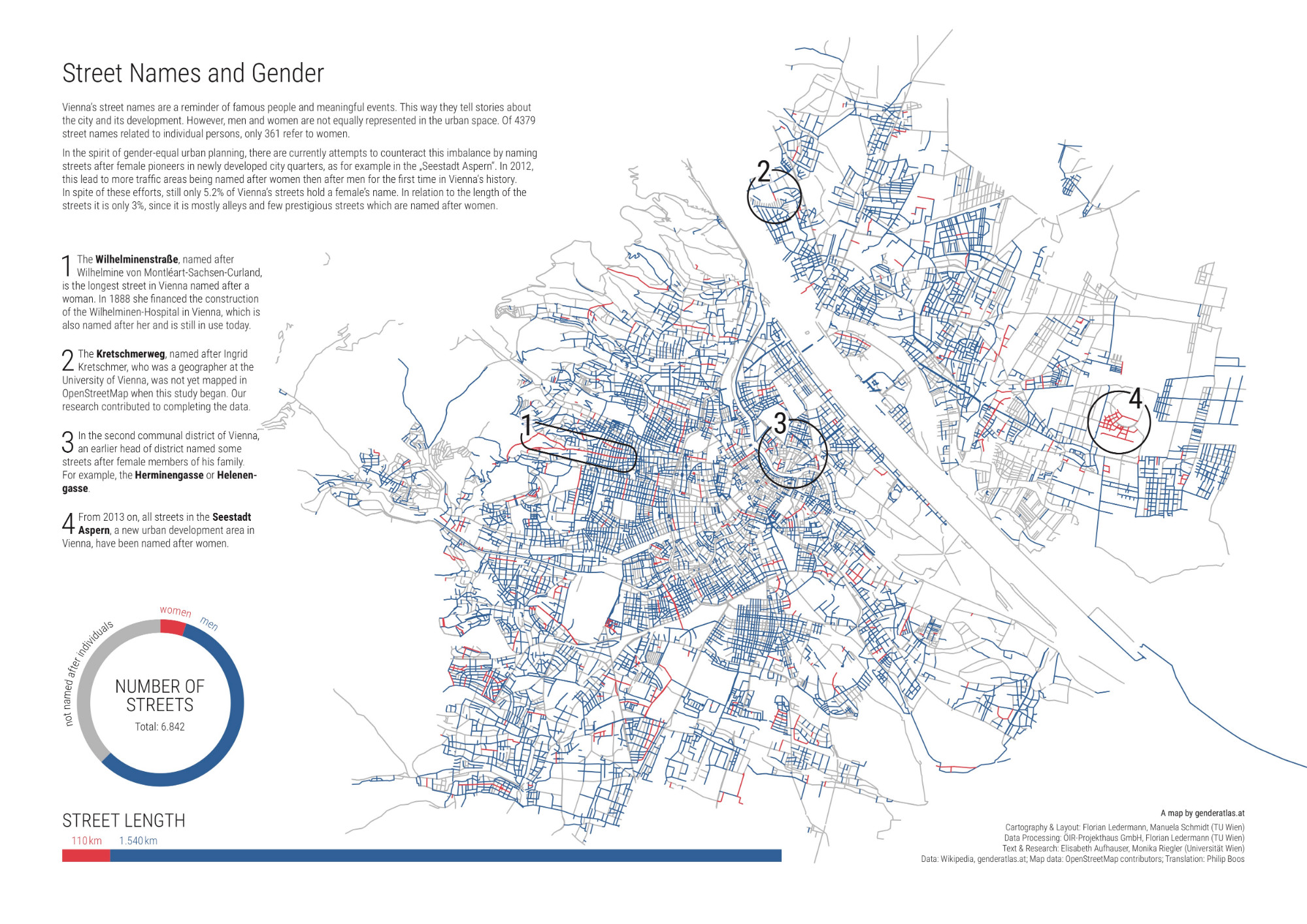