“The map is the mirror of our community, it serves to show what we learn and helps in understanding the territory.”
IAAFs Raimundo Kaxinawá, 20081

The experience reported here refers to the Pro-Indian Commission of Acre (CPI / AC)1, which has been working to produce “Indigenous Cartography” with Indigenous Agroforestry Agents (IAAFs) as a means for managing their territories. In mapping natural resources, morphology, environmental conflicts, cultural historical elements and many other aspects of the landscape and life, with the effective participation of indigenous peoples, it is becoming an important tool for territorial and environmental management of indigenous lands in Acre.
The production of mental and geo-referenced maps, created through education, incorporates deep knowledge that indigenous peoples have about their lands and their environment. The indigenous mapping as a process has contributed to indigenous people using these maps, which were produced by them, as a tool for the planning and the management of their lands. This is especially noteworthy since maps have been tools that were historically used against them. This paper attempts to provide answers to the problem of territorial and environmental management of the Acre Indigenous Lands and the scene of conflicts experienced by some indigenous peoples with illegal logging in the border region between Brazil and Peru.
The ethnomapping workshops, educational activities carried out in indigenous communities, gather a significant number of indigenous representatives to discuss conflicts, problems and advances related to spatial and environmental management. These workshops are useful to map and classify the indigenous design, the different ecosystems that make up their land, areas of agricultural use, management and conservation of natural resources and agroforestry. They also deal with identifying and naming the main rivers, streams and lakes, areas of refuge for wildlife, cultural and spiritual sites, in their original indigenous language as well as identifying the history of occupation, the conflict areas and other significant aspects of indigenous peoples.
The ethnomaps2 produced by Indians have become an extremely important tool in the planning of territorial and environmental management activities because the mapping practices enable reflections, discussions and community mobilization for more sustainable and organized forms of using the land and natural resources as well as protecting the biodiversity of the territory. Another important aspect of participatory mapping activities is the systematization and implementation of Land Management and Environmental Plans (LMEP).

The Indigenous Cartography – Some Achievements and Advancements in Acre

The Indigenous Cartography in Acre has made significant progress since mapping the activities contributes and assists indigenous peoples in the production of many valuable materials for indigenous schools. This, in turn, supports the development of community projects and informs the surrounding society about the reality of the territory and the views of the people living in it. It further reflects and organizes the management and the protection of their territories. Some of the results of this work are that today many indigenous schools have maps and textbooks and materials of their lands in their languages. The maps were made by the Indians themselves, so consequently this has contributed to an improvement of teaching and targeting policy for minority languages in Brazil. The maps of indigenous lands contribute to the history of content, where indigenous peoples are historical subjects and active in the transformation of reality while valuing their narratives about the past and present. The geography contents assist in the discussions and reflections regarding their wealth and difficulties. It also assists in the students’ and teachers’ reflections on management processes of their territories.

“Something I found really beautiful, was the fact that we wrote down the indigenous names for the rivers. We had already identified some of them, but now we found out that actually all of them originally had native names. But these names haven’t been used by the younger generations. When the white men arrived, they gave their own names to the rivers. These names became
the commonly used ones and only few people still remembered the native names. But now everybody knows the original names again and we want them to be used in the schools as well.”
Bebito Pianko, 2004

Another significant result of ethnomapping the Kampa Indigenous Land of Ammonia River in 2004 is that the maps produced by the Indians were important evidence to show the Brazilian government invasions of their land by Peruvian lumberjacks. This triggered a series of public actions of surveillance and enforcement along the borders Brazil-Acre and Peru-Ucayali. Another example of the power of maps and their significance as a political tool were discussions, negotiations, management and resolutions of conflicts between the Brazilian government and Kaxinawá Rio Humaitá. These maps were produced in the ethnomapping workshops of Indigenous Kaxinawá Rio Humaitá. They are important pieces of assistance in discussions and with the issues of negotiating with indigenous groups who voluntarily live isolated in the southern part of the indigenous land. The maps were used in awareness workshops as a tool that helped to develop protective strategies for isolated Indians and to solve inter-ethnic conflicts in that region.
The ethnomapping workshops initiated in 2004 contributed positively to the situation of the indigenous peoples of Acre, reflecting the construction and systematization of management plans for their land. From 2009 on, a very significant fact in relation to the uncovering of ethnomapping processes was the inclusion of “Territorial and Environmental Management Plans” in the public policy of the Acre state for indigenous peoples. Currently the state of Acre has 29 Plans of Territorial and Environmental Management of Indigenous Lands, and within its policy for indigenous peoples the state government has made human and economic resources available to the Indians. Through their associations, they can now implement part of their management plans into their communities. The policy focused on the territorial management of indigenous lands in the state of Acre. It positively influenced this policy on the national level for the Territorial and Environmental Management Plans for Indigenous Lands (PGTAs) and for participatory mapping (ethno-zoning and ethnomapping). It was set up in 2012 as key tools for the National Policy of Territorial and Environmental Management of Indigenous Lands in Brazil. Currently the Ministry of the Environment, along with the National Indian Foundation – FUNAI3 – are responsible for promoting, supporting, developing and implementing the Plans of Territorial and Environmental Management of Indigenous Lands.

The ethnomaps made by indigenous communities are important planning tools for the protection, conservation and management of natural resources. They fill the void of information found on official maps. They also expose opinions, ideas and aesthetic preferences. Furthermore, they are a powerful tool that can be used for various political purposes. The maps are also powerful tools to fight for certain claims. The production of ethnomaps creates the possibility for indigenous peoples to build their knowledge and values on the Indian’s relationship with “the other”, thus contributing to the formulation of a future strategy by enabling non-indigenous people to understand the processes of occupation of geographical space. It also sheds light on social interdependencies within the economic, political and ecological contemporary world. In this case, the cartographic knowledge of and for indigenous peoples can be an important advocacy tool within the territory and the cultural and intellectual heritage it depicts.

All citations extracted from interviews with the participants of ethnomapping-workshops conducted by Renato Gavazzi. 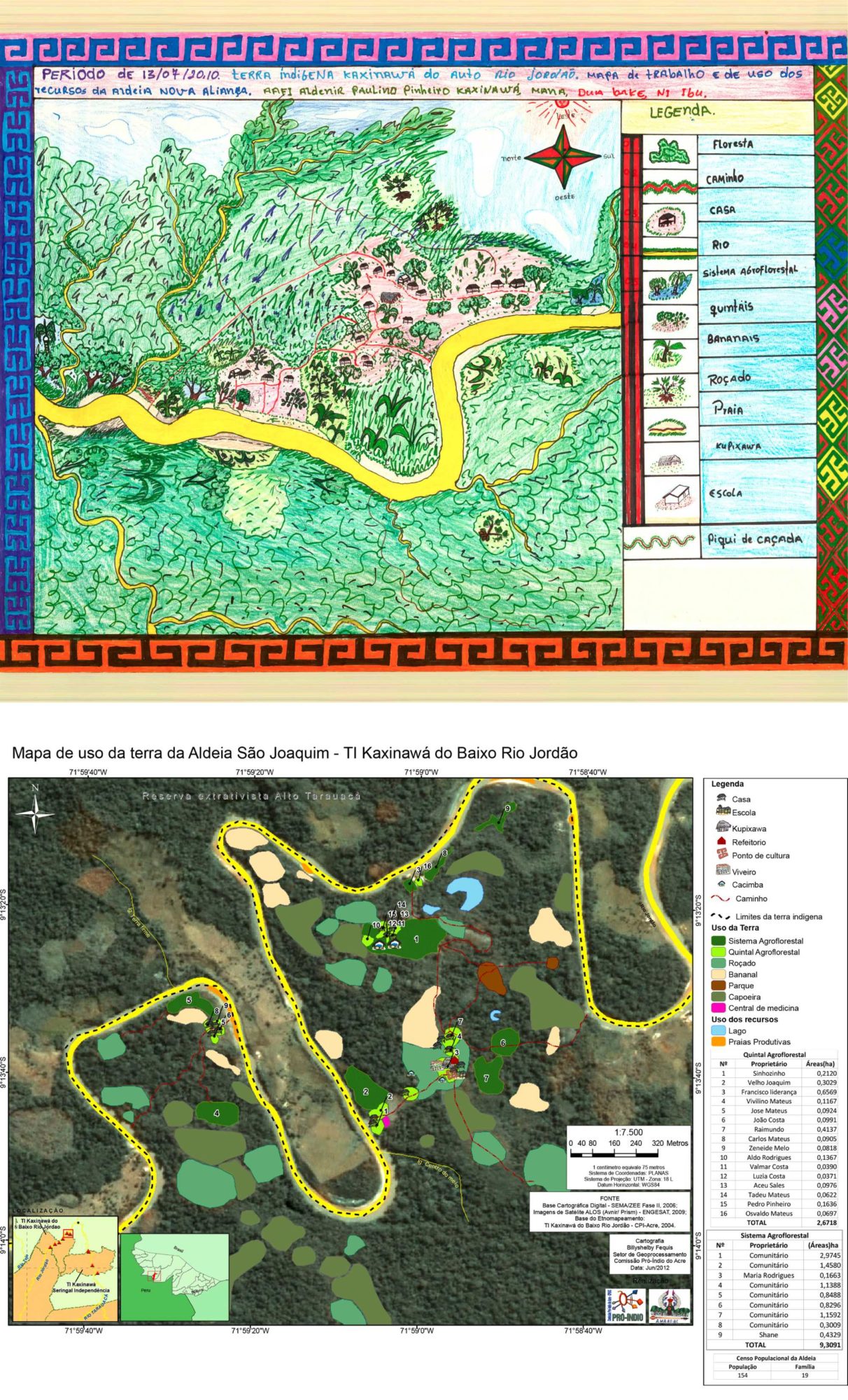