Social movements often take place in public space: during demonstrations and other political actions people move along streets, paths and sometimes cross-country. Often, when we want to reach places, we are denied entrance. And only rarely do we have the opportunity to protest on familiar terrain close to our homes. Thus, the need for maps focusing on protest becomes obvious.
Especially during protests which aim to achieve more than just walking along a police-approved demo-route, independent and spontaneous orientation is essential.
In Germany, for example, there are regularly recurring protests for the purpose of stopping Nazi demonstrations, demonstrating against ecologically destructive surface mining or to disturbing the transport of atomic waste. Often the concept of the protest is to decentralize and to carry out different actions in different places at the same time. Participating groups and individuals can either rely on others and follow along – or they can organize themselves independently and hereby create a more powerful protest. In order to achieve this kind of autonomy, you will need a political action map. Such a map shows important contact points, landmarks, demoroutes and protests in their surrounding area. If, during a protest, up-to-date information is broadcast via live ticker, cellphone, smartphone or radio, this information can be referenced on the map. This way, ideally everybody knows where they have to go. Additionally, useful infrastructure can be included on the map: Is there a store somewhere close by? Where is the closest public toilet? In case of serious confrontations, the locations of pharmacies and hospitals are useful. If available, other information like live ticker websites or phone numbers of information hotlines, street medics and legal aid services, etc., could also be provided in a corner of the map.
Political Action Maps in Practice

Political action maps are often used in demonstrations and protests in Germany – we don’t know about the situation elsewhere (please tell us if you do). Some of these maps are made by Kartographische Aktion. Organizers of protests contact us, explaining that they could use a map, and we provide one for them, as a kind of demonstration service, so to speak, just like there are collectives for loudspeaker vans or protest medics. The organizers print the maps themselves and distribute them on-site. Most of the maps are also made available online for self-printing. We regularly provide maps for the groups we are in close contact with. Others have seen our maps during a protest and have contacted us for their next event. During the last six years we have created about 90 maps, mainly for anti-fascist protests, but also for anti-capitalist as well as ecological and feminist event days. Thus, creating maps has become a part of our political work. We support others with whatever we can contribute. This also works over a distance, which is especially useful for groups in remote and rural areas that would normally receive less outside support than urban movements. So far we have had to decline only few requests and only because it was impossible to make a map on time.
But how do you go about creating such a map? Most of our maps are made on the basis of OpenStreetMap (OSM), a free online map or rather a map database. At least in central Europe, the map data has such a high quality that it outperforms even the
official maps. There are dedicated programs that enable you to make “normal” maps from OSM-Data which are in turn enriched with additional information through image editing programs. Over the last years we have standardized and optimized our sequence and written scripts to automate certain steps. This has reduced our workload immensely: While having needed up to two days working on a (bad) map previously, today some maps require only two to three hours of work. And they have become much better along the way.
This steady and “functional” approach probably also explains why the maps appear so simple and look so much alike. They all have the same set of rather neutral-looking icons, symbols and markings. The style is a compromise between the technical feasibility of presenting as much graphical information as possible on a small, reasonably priced and handy piece of paper without covering important information, such as street names or markings. Who knows what might become relevant on the streets later on? Some people only need the layout of big streets while others want to know the quickest way to get through an array of garden plots or which shortcuts and beaten tracks are available. All in all, the map follows the model of traditional city maps.

The Maps of the Future – Decentralized and in Real Time?

Meanwhile, we have begun efforts to enable others to create their own political action maps. Decentralization, distribution of skills and self-determination always lead to improvement. The means and tools of map-making are increasingly available for free. Technological hurdles are being lowered and becoming less and less of a problem for more and more people over time. That is why we have published some instructions for making political action maps on our blog.
At this point, the emancipatory potential of free software and geodata developed in the last years is becoming apparent. Only a few years ago, creating your own maps was simply not feasible in Germany, especially for rural regions. The coverage of OSM-Data was initially so patchy that for a functional map it was simply unusable. Instead, proprietary and inflexible topographic maps had to be utilized. In other regions of the planet, OSM provides the first possibility whatsoever to get access to useful map material.
With growing coverage, more and more possibilities arise to make use of the data for one’s own purposes.
With a growing proliferation of online applications, smartphones and mobile internet, the question arises: What could political action maps look like in the future? There are already approaches and attempts to work with digital live maps that cover the ongoing situation during protests on the smartphone. In some actions, for example, the map crowdsourcing tool Ushahidi is used, by means of which many people can independently add information to a map. In Berlin, the app Gegen Nazis was developed, which illustrates the routes of Neo-Nazis and counter-protests for a few demonstrations. There is still great potential in this field, but a general development is on the horizon: The dynamic of such situations could be portrayed much better in live maps. These could help making the current situation more distinguishable and allow for a more spontaneous reaction.
Upgraded police units also utilize such systems to control or suppress protest events. This and a number of other new problems have to be considered. The authorities can, for example, try to use internal protest communication for their own purposes. The widespread use of cell phones and smartphones is already being utilized by law enforcement agencies to gather information about the protests and their participants. In Germany, cases have been made known in which the police have investigated identities of people in proxmity to protest marches, have gathered detailed call records as well as created movement profiles and gathered the contents of cell phone communication. If protests are made to depend on mobile devices, this also facilitates the possibilities of surveillance for the authorities. Moreover, participative, dynamic maps could be manipulated (e.g. by the police or other participating groups) or used to predict the movements of protesters.
Nonetheless, political action maps remain an emancipatory means to support protests – on paper or on screen. The future will show us yet more and easier ways to enable everybody to orientate themselves in public spaces during protests.

Create maps and use them to make change!

Map right column by Kartographische Aktion. Special thanks to the OSM contributors.
This map was originally published in German and has been translated for its publication here. 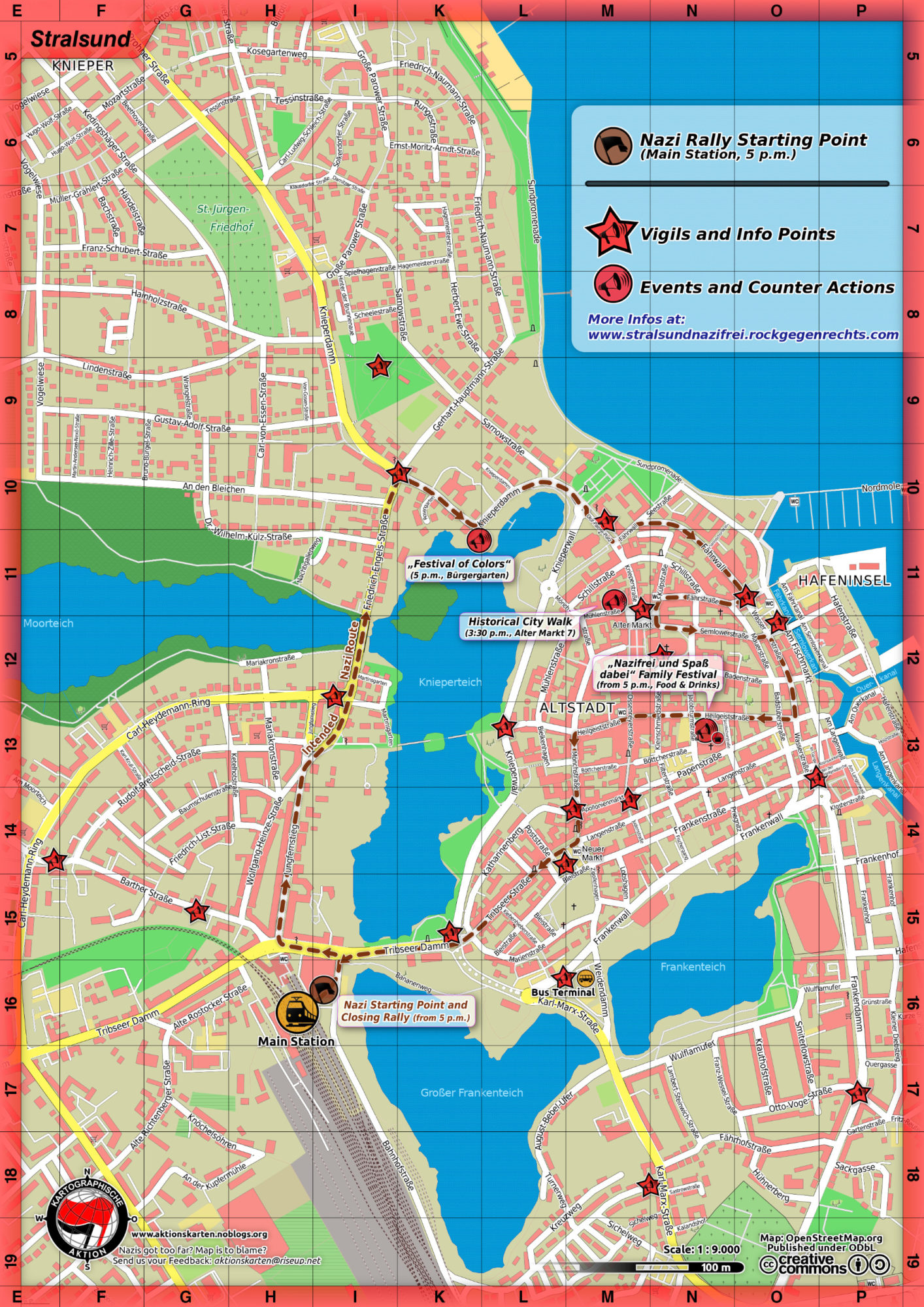